Orsa wears heavy armour for combat and is used to climbing up rigging and jumping from ship to ground or deck to deck. Her time at sea has also found her to be a proficient swimmer against the currents and her navigation skills are also practiced.

She is a force to be reckoned with in a fight. Often being the first to take up arms and leading the charge in front of comrades she cares about. When in battle she is an intimidating sight yet when relaxing she looks relaxed and approachable. She will always subconsciously be on guard when meeting new people.

Appearance:
Tall, wild brown hair, faded scar on left eyebrow just avoiding the eye. ( \ direction).
Eyes appear to be a dark golden colour. Muscled but not massively bulky.
Heavy armour, bastard sword is weapon of choice, so often carrying one.
Has other scars but none really noticeable whilst dressed.
Good posture in general due to weapons practice.
26yrs, 174cm, 63kg.

My family is from Antiva, however something happened when I was younger and I got shipped off to Kirkwall for my own safety. I had no family in Kirkwall who would help me. My Uncle (Vincent Barbolani) wanted nothing to do with me to protect his interests, and as such I grew up in the underbelly of the city. I still know little more about my parents than their names. If they ever tried to keep in touch with me I never found out.

I became a smuggler at a young age to get by, and later became a pirate. As it turns out, I always did prefer a clear cut fight to the hush-hush and stealth required of smuggling. I was fifteen when I left for the Waking Sea. Off I ventured and there I joined several different crews over the years. I served on a ship called The Thaig to begin with, but I never stayed with a crew very long in the beginning.

Eventually I found a ship and a crew I could call home, serving under Captain Urso Vorn on the Regulus. He was a ruthless man to his enemies, and much like his name he was huge with the stature of a bear. He wielded a mace and shield and was unstoppable on the sea. Despite his reputation he cared for every member of his crew and would treat wrong done to them as wrong done to himself. I greatly admired him and spent eight years in his company. (His whereabouts is currently unknown).

During these travels I met a female pirate from Rivain (Marina de Albear) and we met with each other when and where we could. We liked each other a lot and I thought things would never change… one day however she informed me that after her then current voyage, she had decided to quit whilst she was ahead. She chose to go back to Rivain to look after her younger siblings with her newfound wealth and abilities. After a good while of her trying to convince me to join her for a better future, I still did not want to leave the only life I had loved. In the end she decided I was too stubborn and reckless; that my love of the fight “will see you dead before too long” if I didn’t find something else to live for. She left that day. I think it broke my heart but it took me a few months to realise the truth of this.

Her words now haunt me and I have decided to head back to Rivain in an attempt to find her. This journey will be the last I intend to partake in depending on her response upon our reunion. 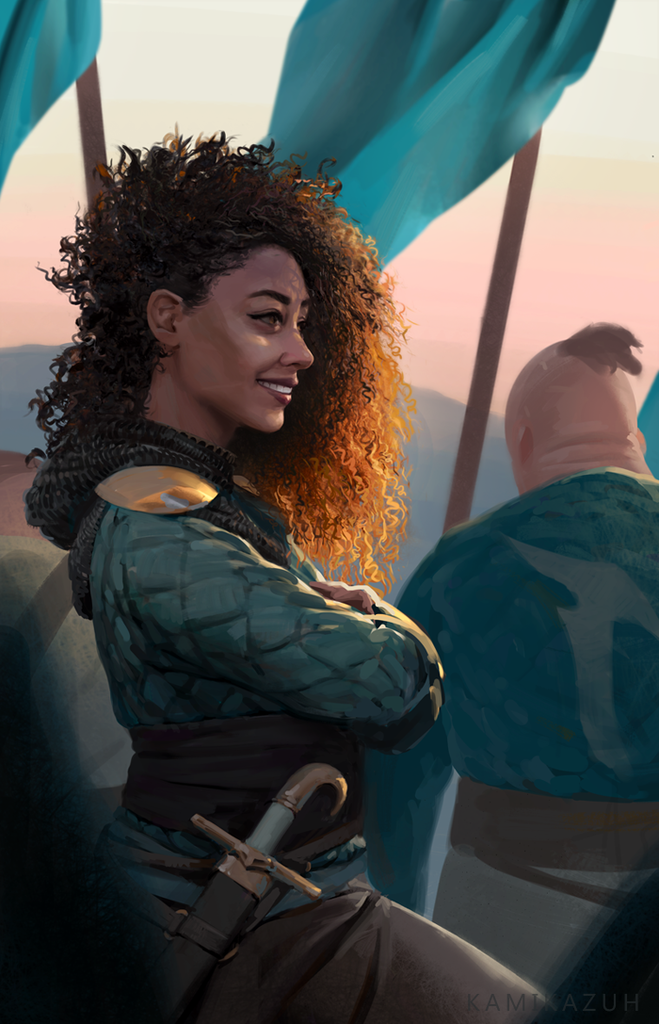