“Did you see that majestic land-shark the other day? I just had to buy it!”

Sarien is tall, of athletic build and surprisingly well-dressed for an animal handler. He has long silver hair which is usually bound into a ponytail. His face is about as easy to read as a closed book, as he keeps his emotions well-hidden.

Sarien is Omar’s partner in the Fang and Claw (7) in Drac’s End. While
Omar stays in Afsaana and keeps things running, Sarien captains a small ship, the Menagerie, which travels to and fro, transporting exotic creatures. Sarien is a skilled animal handler, as well as a trader; he was originally part of the Menagerie’s crew but bought out the captain a few years ago and went into partnership with Omar.

Largely easy going, Sarien’s only bad habit is constantly worrying about his beasts getting free within Afsaana.

On 13 Drakonis, 9:02 Dragon a landshark escaped and Sarien took it down with the help of Aveline, Isobel, and Orsa. 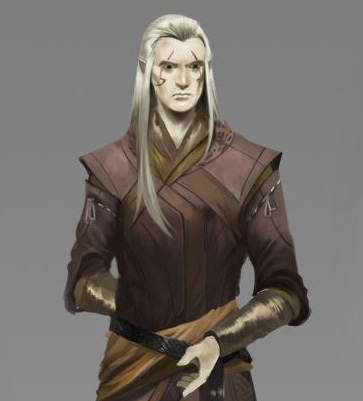